This drive was a grand experience (each day seems to yield more than the previous one). We left Bismarck mid-morning for a long drive to Montana. On the way we stopped at the Teddy Roosevelt National Park South End. Apparently there are three sections to this park, South End, North End, and Elkhorn Ranch. I haven’t looked into it yet, but Elkhorn Ranch was described as Teddy’s ranch, where he stayed while he was visiting–I don’t know if he owned the ranch or just stayed there, the write up on the Park Service sign was vague.

The park encompasses a significant part of the Missouri River Badlands. They don’t look as bad as the Badlands I saw in South Dakota, but they were impressive. After a short drive to see prairie dogs and bison, we got back on the road for Montana.

A few miles into Montana, we left the Interstate for the more scenic state and county roads. We headed north toward the Canadian border, but turn west before crossing. It amazed me that the speed limit on these two-lane roads (one lane each direction, not median) was 70 mph–5 mph slower that the Montana Interstate.

While on traveling west on these small roads, we saw a gigantic storm ahead of us. It was a most awesome sight. The sky ahead was very dark and reached all the way to the ground. Actually, it got a bit lighter closer to the ground giving the appearance of a waterfall. Feeling a little apprehensive when the lightning started, we kept driving forward. Amazingly, a clear spot opened up directly ahead of us.

We had dark storms with lightning on both sides and (relatively) calm spot over us. I say relatively calm because it may have been the worst rain I have ever driven through–without pulling over to wait. There were times where visibility dropped to almost nothing and the small ruts from years of wheel traffic were full of water. It didn’t last too long. Finally, the lightning was behind us and drove on to Havre. 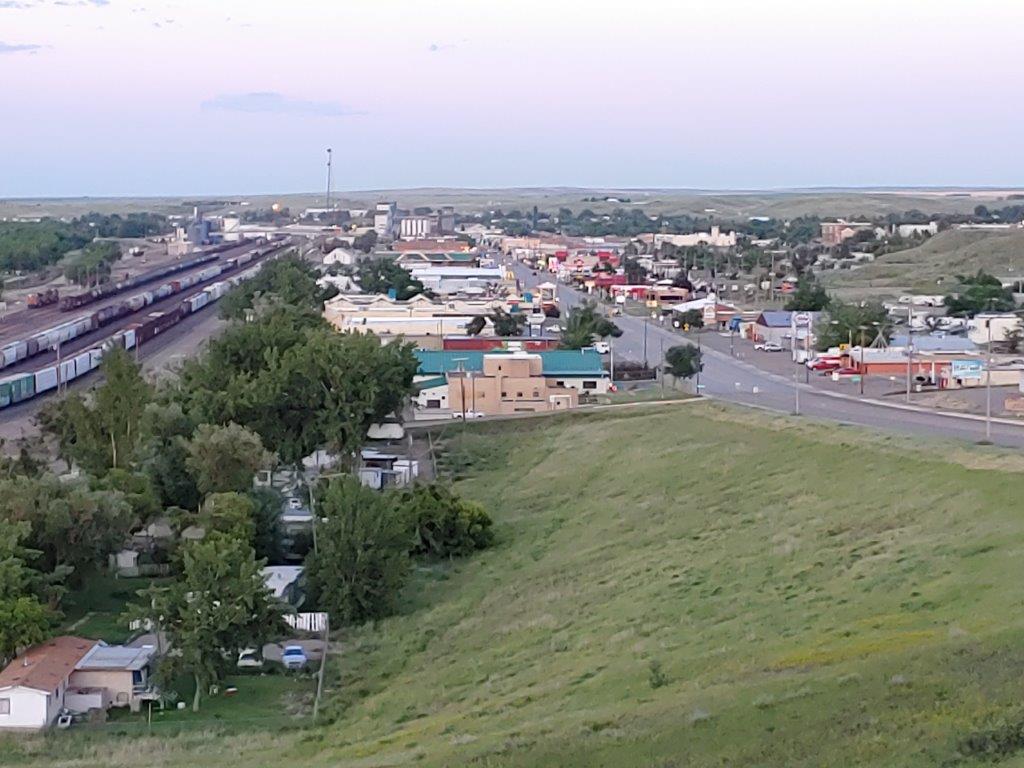 Havre is a small town of about 10000 people. It owes its existence to the miners, cowboys, and mostly to the railroad. Prior to that it was a well used hunting ground for thousands of years. There were four well-used ‘Buffalo Jumps’ where Native American hunters ran buffalo over cliffs as a hunting technique. (The railroad destroyed three of these as it laid its tracks.)

The sunset here was amazing. My photo doesn’t do it justice.