We zeroed out the trip odometer, took a couple of starting photos

, and got on the road

, making our way to US Route 29 South. A band we heard at the Reston Summer Concert Series a couple of years ago was playing at a festival at the IX Art Park in Charlottesville. I never did figure out if the park was pronounced the 9 Art Park or Eye Ex Art Park. Either way, it made a perfect starting point for our month-long journey.

Except for a few eye-sores along the way, the drive through Virginia’s back country is quite beautiful—the flowering trees, the horse farms, the vineyards, the rolling hills leading up to the mountains, all lush and green. Outside of the bigger towns, the traffic is manageable and moves along. Every now and then we’ll run across a small outcropping of a town with rundown buildings or strip malls well-past their prime, and of course the random Confederate flag proudly proclaiming “we’re number two”, “we’re big losers”, or “we went to war against the United States of America and lived to complain about it”. Otherwise, it was marvelous start.

Being late in the day, we stopped for a bite at a Five-Guys just on the outskirts of Charlottesville. Five-Guys can always be trusted for a good gluten-free burger and fries (though, we don’t often admit to eating burgers and fries). After filling ourselves, we headed in to the IX Art Park, where a warm up band was already performing

. To pass the time, we walked around the park, enjoying the various art and craft exhibits in the convention-like setting. We watched a woman juggling

, while being driven around in a makeshift transportation device which began life as a wheel-chair. 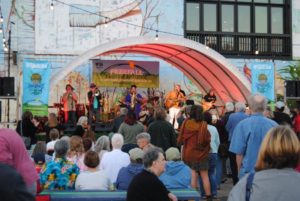 was an eclectic band playing an interesting variety of what they call Homegrown World Groove! They formed in Charlottesville back in 1990 and have stayed together even though the members have scattered around the country living their lives. They come back together a couple of times each year to perform and Charlottesville is always a favorite, nostalgic stop for them.

Charlottesville is an historic college town (University of Virginia) with plenty of old buildings and a great walking street in the center of town. The main university campus was designed by Thomas Jefferson and maintains all the grand aura of colonial days. This was all tempered due to the town still in mourning over the murder of Heather Heyer a month earlier. The comforting words from the stage as well as the chants from the crowd let it be known that Nazis and other white supremacists were not welcome in this southern town.

As the concert ended we jumped into the Toyota for the short drive to our first motel of the trip. Just down the road, we pulled into the Best Western in Staunton VA. This was the first of many places where we stayed near a train track. In fact, the track was immediately behind the building—perhaps 20 feet. We counted three trains tooting by that night. But, our spirits were high and we had our first entry on our lessons-learned list. (side note: they gave us double points for our stay).