For Susan’s birthday we decided to see one of our favorite bands who were playing at a festival in Charlottesville Virginia. Baaba Seth, whose members live in various states around the country, gets together a couple of times each year to perform–they’ve been doing this for over 25 years. So, the day after her birthday, we jump in the car and head to Charlottesville. We spent the night in Staunton Virginia, at a Best Western with an active train track behind it. The clerk laughed when we asked for a quiet room.  We counted three trains that night. The next day we kept heading south… and our road trip began. 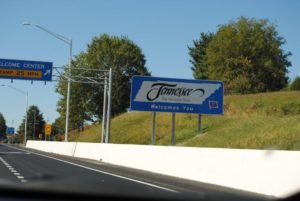 Heading down I-81 through the Shenandoah Valley to the very tip of western Virginia (not West Virginia). We enter Tennessee where we joined I-40 for most of our trip west.

We stopped for the night in Nashville and had quiet evening at a nice Airbnb. We’re getting quite used to this form of accommodation. With a restful night behind us, we continued on our way westward. We entered Arkansas that morning–Susan’s first time in that state.

We stayed in Little Rock and visited the Bill Clinton Presidential Library–Heifer Project was across the parking lot and we visited that, too.

Continuing our journey, we crossed into Oklahoma 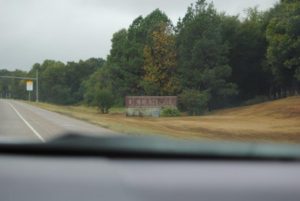 on day 4, and kept on driving. It was a long state, and we stopped a couple of times, but didn’t have time to do much. Our schedule kept us moving into Texas 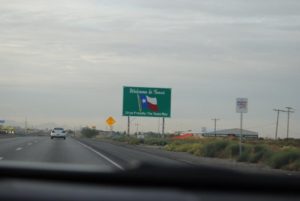 , where we spent the night in the small town of Shamrock–known for 500 motel rooms, and not much else. On day 5, we jumped back in the car and left I-40 for more rural roads. This provided us the opportunity to enter New Mexico 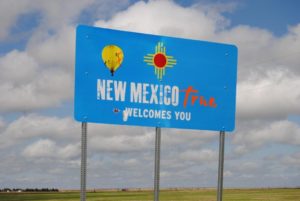 on small, very scenic, back roads. We drove around the eastern and southern arcs of the Ring of Enchantment. We got some wonderful pictures here. We stopped for the night in Taos, where we had a couple of fantastic meals. After a night in old Taos, with a visit to the Taos Pueblo and the bridge over the Rio Grande Gorge, we continued on to Santa Fe for our first multi-night stay.

We continued on to Albuquerque to visit Uncle Vinnie (and Cousin Richard). Having lucked out on visiting Albuquerque during the balloon festival, we spent the evening meandering among the balloons during the “Balloon Glow” event. More on that later. At some earlier point we picked up the now defunct (but still famous) Route 66

. We followed this for several days.

Leaving New Mexico, we made our way to the Grand Canyon

. Arizona welcomed us with great weather and magnificent views. The canyon provided some great hiking and sightseeing. We exhausted ourselves. After a night at Grand Canyon Village (we could only get one night in the lodge due to how late we tried to get reservations), we drove down to Williams, AZ for two nights. Sedona, with its great views and vibes was our day trip in between. And, I must mention the best Italian restaurant–Picazzo’s Healthy Italian Kitchen. All gluten-free and great tasting. We order extra pizza and lasagna and ate well for several nights afterward.

When our time there was over, we headed north to Zion National Park and Bryce Canyon. Of course, Lake Powell is on the Utah

border and beckoned us for a stop. Then on to some of the most magnificent parks in the country. Several nights later we headed south again for two nights in Tucson 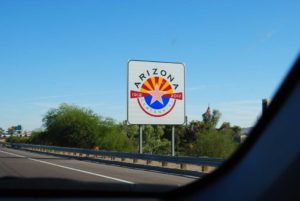 , AZ. More great food and two restful nights. On the day in between, we headed down to Nogales for a daytrip across the Mexican 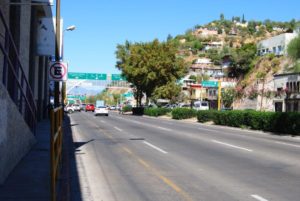 border. This was the first time either Susan or I have ever been to Mexico. After seeing countries on two other continents, it’s about time we visited our neighbor to the south. It was well worth the experience. After a good walk around Nogales, we headed back home to the USA 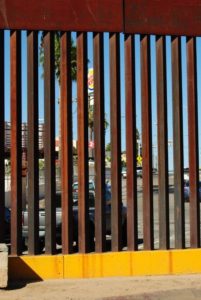 (you can tell by the Burger King sign on the other side of the imposing fence).

The next day we crossed back into New Mexico

for a night in Las Cruces. We grabbed some pictures of their famous recycled roadrunner on the way into town. We had more great food, and even carried-out several chicken dinners for the next night. The following day we entered Texas

again, near El Paso, and kept driving for a long time. We ended up in Fort Worth to see Cousin Richard again–where we ate the chicken dinners.

The next several days brought new states for both Susan and me. Our next crossing was into Louisiana

for a couple of nights in New Orleans. The French Quarter was a madhouse–and it was mid-October, many months from Mardi Gras. This place must be unbelievable then.

It rained all night, but mostly quit by the time we jumped in the car to continue our quest. We entered Mississippi

(another new state to both of us) and decided to get off the Interstate for a visit to the coast–and see lots of water after being two weeks in desert. Well, we got more water than we bargained for. We cut down to US90 to see Bay St Louis. We kept on US-90 with the intention of passing through Biloxi and Ocean Springs.  That didn’t work out. We hit a few big puddles left over from the storm the night before. As the puddles got deeper, we noticed the lanes heading back were closed due to high water. Soon the Jeep we were following through the puddles on our side was riding very low in the water. We decided our Toyota had reached its fording limits. But, we couldn’t go back, so we turned up into the neighborhood only to find more closed roads. A helpful city employee, who was putting up road closed signs, gave us a multi-turn route to follow to get back to high ground. It worked and we resumed our trek on the I-10 East.

Thinking our ordeal was over, we stopped for gas and a lucky carwash to rinse the rain runoff from the underside of the Toyota. Things went okay for a few miles–then the rain started. This was some of the worse rain I’ve ever encountered while driving (we’re talking over 45 years of driving).  Then we entered Alabama

, where we started to head north. I don’t think you can read the Welcome to Alabama sign. I couldn’t read it. We did head north but the radio blared Tornado Warnings–everyone was to take cover, and those with no place to shelter were directed to the police stations. Trouble was… we had no idea if we were in the counties mentioned (GPS didn’t have this information).

Eventually, the rain stopped and we continued on to Georgia

. The trip became pleasant again. We stopped in Atlanta where we saw another Presidential Library (Jimmy Carter’s) along with the Carter Center Museum.

The next day we traveled through South Carolina (camera lady was asleep so no picture of welcome sign) and into North Carolina (same camera lady, still sleeping). A two night stop in Asheville for some sightseeing helped to end our trip on a high note (well, let’s face it, it was all a high note). On the 26th day, we re-entered Virginia (via Tennessee) and pulled into our driveway. 7055.5 miles over 26 days, and we’d do it again in a heartbeat!

Stay tuned for write-ups about specific towns and places of interest (to us anyway).