It was a nice Tuesday morning.  The tree damaging rain storm from Monday had cooled down the 90+ temperature and dropped the humidity to a very manageable number.  And, it was overcast so there was no harsh sun.  A great day for an outdoor adventure.  So, Susan and I threw the travel dart on the map and made plans to go to Solomons Island, Maryland.

Solomons Island is a quaint little island near the mouth of the Patuxent River.  Looking across the river you can see the Patuxent River Naval Air Station (known as Pax River NAS).  Our plan was to drive to the Island (about an hour and a half away) and have some lunch at one of the water front restaurants (note: the island is rather small so every restaurant is water front).  That didn’t happen.

When we were about ten miles north of Solomons Island, driving south on Maryland Route 4, we saw a sign for Flag Pond Nature Park Beach.  Knowing that Solomons Island didn’t have much in the way of beaches—mostly docks, piers, and rocky seawalls—we turned in at the park to get a little beach time before continuing on.

Flag Pond Nature Park is another Maryland county park (as was Brookside Garden that we saw May).  Being from out of the county, and out of the state, we had to pay out $8 to enter.  Not bad for what we got.  We parked at the visitor’s center and walked down to the beach on the Chesapeake Bay.  There were placards scattered around describing the historic, current, and future landscape we were walking through. 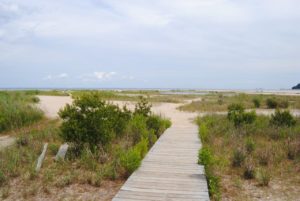 t the end of the trail, we were rewarded with the open expanse of the bay and the changing land mass of the shore.  The cliffs wore down to sandy flatlands of tidal pools and streams.  The sandy soil is difficult for plants to get a foothold, but there are a few hardy species, known as Pioneer Plants, that are able to thrive.  As time goes on, they die and begin to compost, creating soil that is more conducive to other plants–which take advantage of the situation–isn’t nature great? 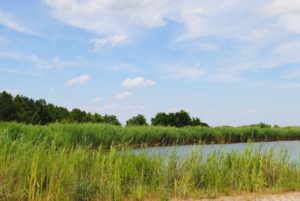 The sandy shore has given way to dune grasses in much of the area between the water and the remaining cliffs.  As the soil improves with composing, larger bushes and trees will take over.  One sign indicated that the view from the above picture would disappear at some point in the future, not from sea rise due to global warming, but from trees growing so as to block the view.

This part of the Chesapeake shoreline used to be high 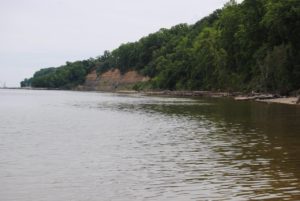 cliffs dropping off drastically to the waterline.  In fact, this area of Calvert County is still known as Calvert Cliffs.  Much of the cliffs have eroded away, but you can still see some remains in the picture to the right.  If you look carefully to the left side of the picture you will see a portion of the Calvert Cliffs Nuclear Power Plant.  We didn’t realized what it was until we left the park and saw a sign for it on Rt 4.  Kinda kills the mood knowing you’re beach-bathing a few hundred yards from a nuc plant. 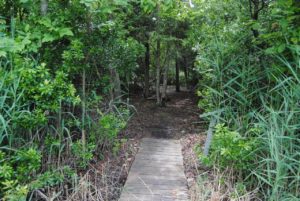 On the way back from the beach, we took advantage of some of the side trails that run through the park.  They lull you in with nice level boardwalks so you don’t have to step in the mud left by the rains and slowly receding tidal pools and swamp.  Then, they end….

The changing landscape is easy to pick out in this park.  The cliffs gave way to open sandy beaches and tidal pools.  As the plants move in, the tidal pools become marshes and swamps.  Here you can see the green algae floating on the surface of what will become a marsh someday.  The algae is so t 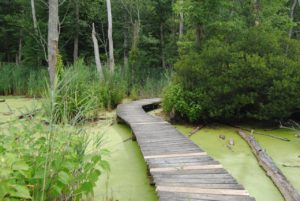 hick, it looks as if you cold actually walk on it.  Luckily, they built the boardwalks to help us through these areas.  The paths went on for miles, but we didn’t travel every one–someday we’ll be back (of course we’ve said that about virtually every place we’ve visited).  There were a couple of big ponds and on Duncan’s Pond, there is an Observation Blind that we stood in trying to spot some unusual animals.  A few birds and insects were all we caught. 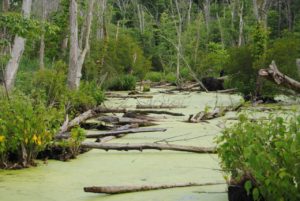 Early on in this visit, we decided to spend more time here, at the expense of Solomons Island.  We ate a packed lunch–insurance against not finding an opened restaurant that we fancied on Solomons Island–at the picnic area near the visitor’s center.  It was quite far from this algae filled pond. 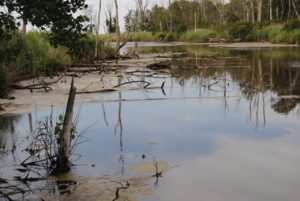 In areas where the water moves better, usually fed directly from the Chesapeake Bay, we saw clear ponds with lots of birds.  We heard other wildlife, but didn’t see too much.

After a very pleasant afternoon, we trudged back to the car and headed out.  Being so close to Solomons Island, we still headed down there for a quick look.  We drove around the island (it only take a few minutes at a slow pace) and headed home.  We did get out of the car long enough for a bathroom break.  Then the hour and a half trek back home…stopping for some ice cream and coffee along the way.  What a day………..