In April of 2002, we had only been living in The Netherlands for a little over a month.  That was just long enough to move out of the Carlton Beach Hotel, in Scheveningen, to a small apartment in Wassenaar.  Justin was settled in at the Elckerlyc International School in Leiderdorp, and Susan was busy coordinating and doing everything else.  I was learning my new job at the NATO Command, Communication, and Control Agency and my new project (the NATO Logistics Reporting Tool) was having its semi-yearly control board meeting.  The meeting was in Estoril Portugal, on the Atlantic coast about 20 kilometers west of Lisbon.

So I packed my bags and headed south to sunny Portugal–leaving Susan and Justin alone in a foreign country to fend for themselves.  The meeting was attended by about two dozen NATO logisticians, civilian and military, from most of the (then) 19 NATO nations.  Conspicuously missing was a representative from the USA.  I was the only American, but I was representing NATO, not the US.  Given that it was my first meeting of this group, I was busy learning, but I still managed to get out of the hotel a couple of times to sightsee.  The below picture is the ugly side of my hotel.

And, now with me in my room.  It took me several tries to get the camera aimed where I would be sitting while also getting the timer to allow me enough time to hit the shutter button and rush to my seat.  I hope I look a little bit comfortable and not too staged.  I had several pictures of me half sitting.

There was a major coastal highway between my hotel and the beach, but we had a nice big pedestrian tunnel leading from the courtyard to the beach–how convenient….

I mentioned that I did get out for some sightseeing.  Here are some pics of the obligatory local castle I visited while in Estoril.

The castle had views of the countryside and the ocean.  The bloke in the green shirt below, is my British colleague, Phil Guy.  We caught a bus up to this castle, had a Coke (no ice, even though it was relatively hot–don’t drink the water in strange lands, they say, including ice made from local water–Phil has had personal experience with that), walked the grounds for awhile and caught a bus back down the mountain to our hotel. 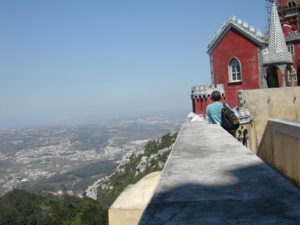 After several days, I flew back ‘home’ to The Netherlands, to continue our European adventure.  Susan, by this time, was well on her way to reading any map you could plop in front of her.