On Day Two, we woke up reasonably early. But, another train was due any minute so we would probably have been awakened anyway. This was to be our first big day of driving. We, with the aid of Google Maps and our Garmin GPS, estimated an eight-hour drive (plus stops). Having seen much of the country between home and Nashville, there didn’t seem to be much need to stop many places, so food, fuel, and rest stops were about it.

The excitement started early. We were moving along nicely on I-81 South toward Tennessee, when a group of motorcycles on I-77 North merged with us. No problem, I joked, as long as they’re not Hell’s Angels. But then, as they swarmed around us I could read the logos on their jackets. Hell’s Angels. I drove more carefully around them than I did when a cop sat beside me for my driver’s test. Soon they left, as I-77 headed away from I-81, toward West Virginia. Onward to Nashville……

Our first stop in Nashville was actually East Nashville (thanks Ian for that tip), where we reserved an AirBnB for the night. We stayed at Ana’s BNB (about a half mile from another railroad track—but this time the train didn’t wake us up). The place was roomy and comfortable and came with a washer and dryer to enable our first (though small) clothes wash of the trip. East Nashville is a quiet neighborhood area with plenty of parks and enough stores, bars, and restaurants to give you something to do.

Having unpacked for the night, we jumped back in the car and headed for downtown Nashville.

Neither one of us had been there before so we didn’t really know what to expect. Of course, we knew about the Grand Ole Opry and the Country Music Capital moniker, but the reality was quite interesting.

Since we arrived late in the day and were leaving first thing in the morning, we missed the tourists sites such as the Johnny Cash Museum and the Country Music Hall of Fame.

We dined at Puckett’s

, on the corner of 5th and Church. Not planning ahead, we arrived with no reservation. Being Sunday night, we naively thought that would be no problem. It was a problem. We could get our names on a waiting list or order carry-out and sit at the outdoor tables (first-come, first-serve). The problem with the waiting list is that the musicians were going to take the stage in about half an hour, and most people were there for the music, so the likelihood of an open table within the next couple of hours was slim. The problem with eating carry-out outside, was we wouldn’t hear or see the musicians–though reason we were here to begin with. Our third option was to sit at the bar, which was also first-come. The bar was full and a few others were standing around it. We had nothing better to do right then, so we put out name on the list and decided to give it a few minutes.

As we waited, we moseyed up to the bar to see if something might open up there. I ordered a local draft beer (just to fit in with the bar crowd). In short order, I noticed a small table near the emergency exit. It had a couple of trays sitting on it as if it was being used for storage. There were two chairs nearby, so we edged the chairs up to the table and sat. We had a great view of the stage. Then we got an idea. I had a little talk with the Maître D’ (or whatever the guy in charge at a Nashville music bar is called), and he said we were free to use the table, but there was no waiter service for it. We could order take-out and sit there if we wanted. So, we did. But when our order was ready, they brought it to our table (all boxed up, in bags), offered us water, and checked on us now and then—I’ve had less service at places where I expected it.

And the music was good. 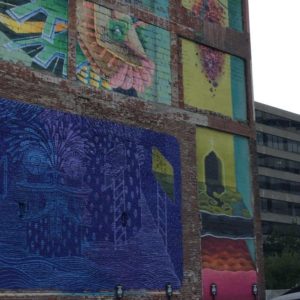 Several singers entertained us as we ate. As I mentioned, we didn’t know what to expect from Nashville, but after hearing the performers, it dawned on us that this town was full of hopeful musicians trying to make the bigtime. They were good.

After dinner, we walked the streets of downtown and every bar and restaurant had live music wafting out of their doors and windows. Some venues were much too loud for my old ears, but it was top quality.

And this was Sunday night. We headed back to our lodgings for a good night’s sleep to continue our journey refreshed.