We spent nearly a week exploring our old haunts in a small village (pop. 3487; 2010 census) where we used to live.

Wikipedia states: A village is a clustered human settlement or community, larger than a hamlet but smaller than a town, with a population ranging from a few hundred to a few thousand. In Ohio, a village ceases being a village if its population grows above 5000.  At 3487, Yellow Springs seems safely in the category of a village (much to the delight of the residents).  But in the not too distant past, there was real concern that the population would breach that magic number and Yellow Springs would become a town—can you imagine the expense of changing all the signs (and letterhead) that proudly announce VILLAGE of Yellow Springs? 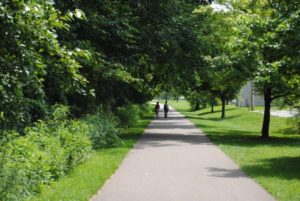 Some things have changed since we left and some things remained the same…  Weaver’s became Tom’s Market (Tom began working for Bud Weaver as a young man and eventually bought Bud out—and changed the name).  The Village Variety closed, Center Stage ceased operation, Mysteries from the Yard is gone, Movieworks/Photoworks lost out to Netflix and digital cameras.  Deaton’s Hardware sold out to DoItBest Hardware before we left, but at the beginning of this year it was purchased by our friends, Gilah and Shep (Gilah was my first customer when I opened Village Magic at 100 Corry Street in Yellow Springs

—I still have the dollar bill she signed for the occasion—Gilah wasn’t into magic at all, but she always supported local stores).  Speaking of 100 Corry Street, that building was an old (Ford?) car dealership (back when small towns had car dealers) that was converted into, among other previous things, a small mall of 4 or 5 stores.  None of the stores from my Village Magic days are located there, but it has been transformed into a great place to congregate (and buy stuff).

Many of the old establishments remain, some under new ownership, and some still operated by the same people: The Little Art Theater is still a central figure in the downtown (we saw half of Hero, but the power went out so we had to abandon it—the owner, of course, offered to allow all patrons to return to any of the following showings, but we were too busy to take advantage of that).  The Little Art has had an interesting line of owners over the decades, including Antioch College for a short time.  Dark Star Comics, Ohio Silver, the famous Winds Café, Epic bookstore

The Old Trail Tavern (in one of the oldest buildings in town), The Dayton Street Gulch,  the great HA HA PIZZA!, Bonadie’s Glass Studio, Mr. Fubs Party, Current Cuisine (who catered our wedding), and the Emporium

(where I buy all my coffee when I’m in town).  Sam and Eddy’s Open books moved around the corner, but is still run by Sam.  Sam was also the realtor who sold our house when we moved—her mother, Bambi, is the realtor I bought the house through many years earlier.

Diane, puts out the award winning Yellow Springs News every week.  Many other shops are still there, but there are a whole slew of new ones filling in every possible nook and cranny where a store could be.  These stores bring in a lot of weekend visitors, but in reality, it was the visitors that brought in the stores.  The town has been bringing in visitors from all over the country (and possibly further) for almost two hundred years.  In 1825, William Mills and a bunch of his friends created a utopian community, which were all the rage back then.  The town has retained some of that bohemian feel ever since.  And, visitors love it.

Another anachronism the town perpetuates is the annual flour and sugar deliveries to widows.  This was begun as a result of Wheeling Gaunt, a prominent citizen who began life as a slave and was able to purchase his own freedom.  He came to Yellow Springs during the Civil War—and prospered.  In his will, he left a large tract of land to the village for the purpose of generating money to buy flour for needy widows.  Much of the land became a park (Gaunt Park) and the village now budgets for gifts to widows.

The town has always been at the forefront of rights and controversy.  In the 1950s, many villagers were proudly on Joe McCarthy’s hit list.  Protest were carried out or planned here during the 60s and 70s for whatever cause needed a protest–civil rights, human rights, LBGT rights, wars.  The 80s seemed to be a lull, except for a couple who regularly walked the main streets with various protest signs.  The 90s brought us more war and associated protests.  And since 2001, well the whole world has been protesting.

When in town we stay at various establishments and with friends (sometimes it’s both at the same time).  This trip we used AirBNB to find a great little yellow house a couple of blocks from the center of town.  The homeowner, Lisa, and her family took an extended vacation this summer and rented out their home while they were gone.  W

e had the whole house to ourselves.  Sitting on the front porch and watching small-town Americana pass by was wonderful.  One morning, we had a long chat with a guy who was walking down the sidewalk.  He sat with us on the porch and discussed the news of the day and little bit of history—he wrote an engineering book on the Wright Brothers.  Another time we got deep into a discussion of local school board tax issues.

We also saw the life of the village interacting with each other.  Since Lisa was returning home before our stay was concluded, we moved on to another AirBNB even closer to downtown.  Between the ice cream shop (that was a Tasty-Freeze when I first moved to town and then became the Freeze Dairy Bar when Chris decided to go on his own rather than continuing to pay franchise fees, Chris sold out and somewhere along the line it became the Corner Cone) and the parking lots of Kings Yard and Tom’s, are three little houses.  We stayed in the center one.  The house also doubles as the Body Wisdom Intuitive Healing Studio and Retreat Center , run by Patti and Julie (Yellow Springs and Sausalito).

One of the great attractions of Yellow Springs is the nature preserve owned by Antioch College. 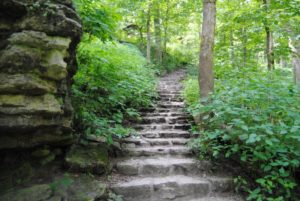 Glen Helen.  It has Winnie the Pooh’s Hundred Acre Woods beat by 900 acres.  It has streams, and cliffs, and a multitude of trails to walk through.  It has a museum

, an Outdoor Education Center, and an office building that doubles as auditorium space for talks, presentations, and other activities.  It also has a natural spring that lent its name to the village.  The yellowish color of the water coming out was claimed to have healing powers.  A large spa grew up around it that drew up to 5000 people a day from as far away as Cincinnati.  No real evidence of the spa buildings remain, but there is a section of a large dam that was destroyed in the early to mid 1900s.  At one time, it had a swinging rope bridge that crossed the big stream.  Some people were a bit rough with this bridge and it deteriorated–small repairs were made.  One day a storm brought it down and we thought that was the end.

Luckily, Dayton Power and Light, offered the use of their line stringing trucks and cranes to rebuild it using wire, I-beams, and cement.  It was extremely sturdy.  That was it’s downfall.  It became a goal of some to bring it down.  Apparently jumping on a  swinging bridge was exciting.  Within a very short time (less than two years, if I recall correctly) it collapsed.  The college never rebuilt it.

There is a lot of history in this little town which is the home of Antioch College (and Antioch University).  Dave Chappelle calls this place home, Rod Serling and Correta Scott King went to school here, John Lithgow spent time, as a youngster, at the successful experiment Antioch School (as did my kids).  MacArthur Foundation Genius Award recipient Virginia Hamilton lived here most of her life.  Another famous writer, Suzanne Clauser, wasn’t born here but she called it home for a long time and died here last year. 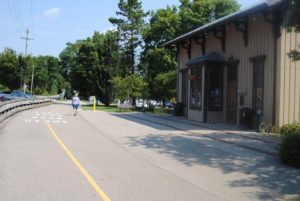 This little town seems to be an incubator for interesting things.  The people born, settling, or passing through include a Hall of Fame rock star, singers, writers (some mentioned above), documentary film makers, award winning fashion designers, and many others.  In Yellow Springs, you can regularly see someone worth millions drinking coffee with someone on food stamps, having a lively or serious conversation.  And, you probably can’t tell which is which.