Where can you see a month of great plays, wonderful scenery, a smattering of local and American history?  Well, head upstream on the Potomac River, about 12 miles past where the Shenandoah River joins on its way to the Chesapeake Bay.

On a sharp bend in the meandering Potomac you’ll find Shepherdstown, WV.  A small college town with a lot of history and a lot of current (whatever history is when it’s happening).

This town, of less than 2000 people, was chartered 30 years before the United States was the United States.  It was the birthplace of Robert Lucas who moved on to Ohio where he held just about every major political office including Governor.

He also was governor of the Iowa territories.  Among other notables born here was Col. James Strode Swearingen, who is credited with the founding of Chicago after he and his men established Fort Dearborn at the mouth of the Chicago River; James Rumsey, who invented the steamboat (there is a huge monument to him near the river bend where he tested the tiny contraption); and Danielle Corsetto, the creator of the Girls With Slingshots webcomic.

The reason we traveled to this quaint historic town was to experience the theater that takes place in July at some of the more than half a dozen theaters and galleries in town.  Shepherd University, hosts a series of original plays each summer.  The Contemporary American Theater Festival (CATF) takes over the small town after the students leave and produces plays that bring visitors back each year.  The few hotels and B&Bs tend to book up early and the college actually opens the dorms to accommodate the influx of theatergoers.  Being only two hours from DC, there are a lot of day-trippers catching a play or two each day.  This year there were six plays being performed on a schedule of three or four per day, so you real theater buffs can catch most of them in a two or three-day visit. 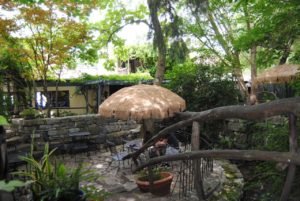 Our favorite is the Blue Moon Café.  The food is good and the indoor seating is reminiscent of small town diners shoved into a building that was once something else.  But, outside… the open-air dining patio is shaded by several very old and large trees.  E

ven on the hottest day, sitting outside is comfortable.  The best part, however, is the stream that runs between the tables.  You may have to traverse a bridge to get to your table.  With all the other alternatives, we ate at the Blue Moon Café twice in our short stay. 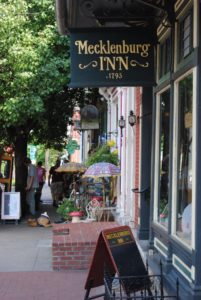 A walk along German Street brings you past tea and coffee houses, a bike shop (where you can rent bikes and paddle boards), flower shops, book and comic stores (I’m sure they sell Girls With Slingshots), a library, herb and tonic shops, clothing boutiques, art galleries, music shops, and several antique, craft, art, and gift shops.  There were even a few shops that I had no idea what they provided.  Moving off the main street, you get even more.

On this trip to Shepherdstown, we stayed at the Bavarian Inn overlooking the Potomac River.  From our room, we had a view of the river and the bridge connecting West Virginia to Maryland.  The bridge, even in the heat of July, nearly always had pedestrians walking or running between the two states.  Further down, out of our view, was the train trestle.  We could hear the whistle several times each day.

The plays we saw were extremely good—well written and superbly acted.  Most of the theater spaces are small and cozy—theater in the round setup.  Of the six current plays, we only caught three.  The first was a one-woman, coming of age story, written by Allison Gregory, where a thirteen-year-old girl and her friends are caught up in decisions they are too young to fully grasp or handle—Wild Horses.  The second was a movingly performed play by David Meyers, based on the true story of the White Rose movement, peacefully protesting Nazi power during World War Two.  Two lines stuck in my head—“Just because you repeat a lie, doesn’t make it true” and “When the world looks back at what happened here, they will know that at least one person had to courage to speak out” (editor’s note: these may not be completely accurate quotes, but they’re close).  We ambled out at the end awe struck and thoughtful—We Will Not be Silent.  The last play we saw by Eleanor Burgess and was as thought-provoking as the others.  This involved a teacher and student who, on paper, appear to be very much alike.  Other than the teacher being white and the student being black, they are both very liberal seekers of equality, both privileged in their own ways, both struggling, with very different answers to complicated uncomfortable questions.  The Niceties makes you rethink the African-American struggle and the wider American response (or nonresponse) to it in several new ways—powerful.

From talking with others experiencing the CATF, the three we missed were just as good.

During a break between shows, we had the time to visit some of the surrounding countryside.  Just a few miles down the road is the Charles Town Races and Slots!  Horse races and gambling keep this sleepy section of West Virginia rolling in money.  We drove passed this and into the old downtown section of Charles Town.  It’s a typical old American town with several US and state routes intersecting in the center.  For quaintness, we prefer the likes of Shepherdstown.  Afterward we headed out of town for a few miles and stopped in at the Bloomery Plantation Distillery. 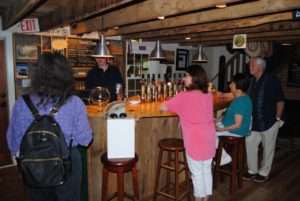 This is a family-run moonshine business.

They turned a 12-acre plot of land near the Shenandoah River into a thriving moonshine experience, where they even grow their own lemons for a fantastic Limoncello—an interesting take on an Italian favorite made with American moonshine.  On the weekends in nice weather, they have live music heavily oriented toward the mountain music we come to associate with hills of West Virginia.  Stop in for a tasting and walk around the grounds (until you can safely drive again). 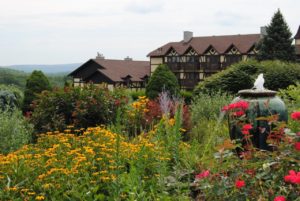 Our lodging experience was a real treat.  The Bavarian Inn is modeled after German Chalets and they all have names evoking the feel of the Bavarian Alps—we stayed in the Danube Chalet which was between the Schwartzwald and Chiemsee Chalets, just down from the Augsburg Chalet.  T

here was a grand infinity pool overlooking the Potomac River.  Hanging onto the edge of the pool as the water falls over the edge while gazing upon the river is quite entrancing.  After the pool, and eating in town, we met Bob and Judy from Springboro, Ohio.  We hung out on a patio near the pool, with our new friends, until midnight.  The river was like a black ribbon flowing along as we made our way back to our room to rest for another day.