From February 2002 until the summer of 2005, I was on loan from the US Air Force to NATO.  It wasn’t really a loan since NATO paid the US Government for my services—it was more a lease.  One of my responsibilities for NATO was to oversee my agency’s work for the International Security Assistance Force (ISAF).

My agency (NATO Command, Control, and Communication Agency—NC3A) provided all the command, control, and communication infrastructure and software for NATO excursions.  From NATO’s inception until the 1990s, this consisted of training exercises.  In the 90s, they deployed in response to genocide that was taking place after the breakup of Yugoslavia.

Then, after 9/11, Article V of the North Atlantic Treaty (which created NATO) was invoked for the first time ever.  The US went into Afghanistan to root out Al Qaeda, and NATO followed right in.  Our campaign was called The Global War on Terror (GWOT), a ridiculously named, unwinnable, effort.  NATO called theirs the International Security Assistance Force (ISAF).  Still unwinnable, but not so brazenly chest pounding.

My job was to herd all the myriad efforts needed (from an IT perspective) to create and defend an overall budget.  Then I had to divvy up the money and track it while coordinating movement of people and equipment into and out of the warzone.  I also had to elicit requirements for unmet needs and determine if and how to satisfy them.  Needless to say, this required some in-country visits.

Now, a civilian going into a warzone creates some interesting problems.  To explain the differences, let me begin by denoting five different kinds of people in a warzone:  First, we have the locals who can’t leave.  These are the poor suckers who are unlucky enough to have their towns chosen as battlefields.  Basically, no rules apply to them—don’t hurt them if you can help it, but don’t trust them much either.  Second, we have the military—both sides, or all sides, since there may actually be many.  These have their own rule (the Geneva Convention is loosely followed when working around it is too onerous).  They also provide for themselves. Third, we have contractors.  Contractors are fighting more and more of our wars recently.  They are governed by whatever contracting vehicle was used to hire them.  The military provides for some of their safety and supplies, but largely, they are on their own.  Fourth, we have the ignorant assholes we call war tourists.  These range from thrill-seekers, to evangelical clergy, to hot-shot vigilantes/mercenaries. They use their own means to unofficially enter the zones and try to provide some perceived level of help to the cause.  Quite often they end up injured or captured (which creates a problem for the soldiers and diplomats trying to work), dead (which makes the hometown newspapers and leaves the military in a bad light since the notion is they could have been saved if the military intervened), or they screw up some important action being planned by getting in the way so the military does intervene.  Now, in an attempt at fairness, some of these war tourists that make the papers, are actually CIA or DoD spies doing something fully sanctioned by the people in charge of the war, but cannot be officially acknowledged.  We’ll just thank that subset for their service to country and leave it at that.

Lastly, or fifth, if you’re counting, we have the government civilians (usually DoD employees, but sometimes State Dept workers, and very rarely from some other branch) that are on a business trip (TDY we call it) to a place of business that happens to be in a warzone.  I was one of those.  I have not been trained in the use of weapons (except the little bit I did many years ago when I was enlisted in the Coast Guard), I did not get regular vaccinations against anthrax or other diseases infesting the locations where wars are usually held, I had the same health insurance that I have today (Kabul General Hospital isn’t in my plan), likewise with life insurance.  My food and sleeping arrangements had to be worked out in advance.

And, I needed armed babysitters anytime I left the relative safety of a camp.  To the right is one of my babysitters.  This guy is a dental hygienist back home in England.  Here, he’s keeping my teeth—and everything else—nice and safe on a downtown Kabul street.

A NATO civilian, which I was since I was on loan (lease), becomes the responsibility of their own nation when there are problems.  So, lucky me, I would be treated by the US military if I required medical attention or evacuation.  I wouldn’t have felt so comfortable if I was Greek or Turkish or from one of our smaller non-NATO Partners-for-Peace nations.  The other problem is that unless I was quickly identified as a legitimate American (see war tourist assholes above), I may lay in a ditch beside the road with no help forthcoming.  As for babysitting, I was not allowed to handle a firearm.  My health and life insurance would cease immediately if I picked up a rifle—so I needed armed babysitters every time I traveled to another camp.

To the left is how I saw most of Kabul and the surrounding countryside.  I have hundreds of photos that are blurry due to the dusty side windows that we were advised not to clean—a clean window allows bad guys to not only see who’s in the vehicle, but take better aim.

The following is part of a trip report I put together to give my team a flavor for what to expect when they deployed to repair or install infrastructure in Afghanistan.  Even in official documents, I tended to get a little dramatic with my writing.

A Journey in Afghanistan
By Fred Rexroad
In the days of high-speed travel, nearly instantaneous worldwide communication and the pervasive concept of a global village, it takes two grueling days to go from the seashore of The Hague to the mountains of Kabul. In the same vein as stories of old where travel to the ancient East went via boats, horseback, donkey carts, and foot, my trip to Afghanistan began with a bus ride and before the end had placed me on trains, planes, taxis, and a

German Fuchs APC in addition to a fair amount of traveling by foot.  I traveled from The Netherlands, to Germany, to

Uzbekistan, to Kabul International Airport.  Though modern technology is evident, telephone calls back home have an annoying echo and e-mails don’t always arrive. Going to Kabul is not so much a trip back in time as a side step into something surreal.  A half century of external armies rolling through and internal conflict have caused more than a generation of the Afghan population to grow up and live in wreckage.  Imagine living and working in a Europe that was never rebuilt after WWII and you may get an idea of living in Kabul.  It takes a more surreal turn when you see a donkey-drawn cart hauling satellite dishes to an internet business occupying a building that is only half there. ISAF is well entrenched in the area and growing. Scattered around Kabul are nearly a dozen compounds housing NATO and PfP troops.  Even though the majority of the population seems friendly and accept us being there, incidents happen so security is a major concern.  Travel between encampments is highly structured and regulated.  During my stay, every trip out of a NATO compound required two vehicles with two armed personnel in each vehicle.  Therefore, every trip I made outside of ISAF HQ to support an NSE (and this was daily) required four individuals who had to stop their own work to accompany me.  This cuts down on whimsical sightseeing trips.  Scheduling exact meeting times is impossible.  Everything will take longer.  Keep this in mind if your sponsor is a bit hesitant about scheduling a trip to Kabul for you—it is extremely annoying for them to baby-sit you even if they desperately need your help. Given all this, AFNorth, following on the experience of ISAF III, has a very smooth process for getting travelers into and out of Afghanistan as well as housing them while in country.  Smooth, yes…convenient, no!  As is ubiquitous with military operations, there will be a lot of waiting.  The watchword here is procedures—follow the rules.  They are simple but not universally known.  If you skip some, there will be consequences.  However, I found nearly everyone in theatre to be quite friendly and helpful-so the consequences are usually just more waiting.  If you are going to be visiting ISAF, please make yourself aware of the procedures-see me or others who have already had the pleasure of visiting the dusty mountains of Afghanistan.

At ISAF Headquarters we experienced life the same as anywhere.  Below are two pictures of the American compound.

The yellow building in the back ground was the headquarters.  It was the only permanent structure in the camp.  The camp, by the way, including the yellow building, was actually a luxurious villa owned by one of the wealthiest men in Kabul—which probably made him one of the wealthiest men in Afghanistan.  This was his private compound.  He rented it to NATO—a good deal since he couldn’t use it anyway with the war going on and all.

The flag shown in these pictures now resides in New York.

One of my friends was a New York City Firefighter, and, of course, given why we were in Afghanistan, during down times, talk of 9/11 came up quite often.  One of my personal stories involved this firefighter, and the Air Force LtCol I was working with asked if I wanted to give this flag to my buddy.  Of course I said yes, so we had a little ceremony where we lowered this flag—which had been flying there for about two weeks—and raised another in its place.  I mailed the flag to my buddy back to New York. 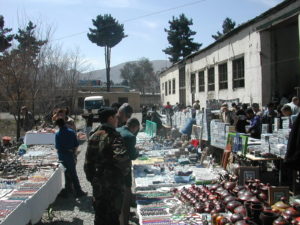 Local market day at ISAF Headquarters.  Once a week, the locals are permitted to bring wares into a protected area at the edge of camp.  NATO forces buy souvenirs and trinkets to send back home.  I bought a tiny Afghan coin from several hundred years ago.  I probably overpaid by a fortune but what I really bought was a story, not a coin.

But life goes on in Kabul as anywhere else.  Here we have two ladies doing their wash in the Darya-e-Kabul—the river running through the center of town.  You can see the mud-brick houses running up the side of the hill in the background.  On my side of the river it was similar.

Here we have two pictures of what I was told are the King and Queen palaces.

They sit across a field from each other—a NATO compound now in between—and the story says one was the main King’s Palace while the other was for the use of the Queen and her female entourage.

There was supposedly a tunnel running from one to the other for the exclusive use of the King.  Interesting story but probably no truth to any of it.  What is true however, is they both have been decimated by years of war and that was all well before the US and NATO invaded after 9/11.  For years, the Russian forces fought over this land and no sooner than they pulled out, the Taliban rolled in.  In fact, virtually all the destruction in my photos happened well before our forces came to town.  And, most of the destruction since, was from Al Qaeda and Taliban fighters lobbing rockets into Kabul trying to hit the embassies.

And life goes on.  Vendors in Kabul sell from damaged structures.  Rebuilding is still probably decades away.

This picture is to show you that some of our military buddies have a sense of humor.