The drive to Sequim was preceded by a jaunt down the road to Crescent Lake, the second deepest lake in Washington, another part of Olympic National Park. Olympic Park is big with Mount Olympus as its center piece. It also has no roads going through it so to see the whole park (the parts you can drive to) require a long drive on US 101 circling the park. You drive into scenic areas from US 101 at various points. We didn’t have enough time to go to other areas, including the Pacific beaches—next trip. Crescent Lake is a glacier fed lake with little or no nitrogen in it. Therefore, it is very clear. You can walk out on a dock and see the lake bottom many feet below. If you used a boat you could go farther out and see farther down. While there, we hiked, of course. We took the path up to Marymere Falls. Along the way we saw a lot of cedar, hemlock, and alder trees. The falls drop 90 feet into Barnes Creek (named after Paul Barnes who settled in the area in 1890—this place is still quite sparsely populated (even outside the park), it must have been really out of the way back then. After another long day, we checked into our Airbnb in Sequim (pronounced Squim) and had a luxurious surprise. The view above is from the deck outside our room. Our hosts sectioned off the two wings or their house after their daughters grew up and moved on and made them into fantastic one-bedroom apartments which they rent out to tourists like us. We were right in the middle of Washington’s lavender country and had magnificent views of the Olympic Mountain Range off to the south.

Sequim is in what is known as a rain shadow. Just a few miles south, in the Olympic Range rainforests, are the heaviest rains in the state and Sequim has almost none (not a desert, but extremely below normal for the Olympic Peninsula. We saw farmers irrigating even during a rain shower. Sequim has about half the rainfall of Port Townsend just ten miles to the east. This has something to do with the location and proximity of the bigger mountains. Apparently, the rainforests leave little to fall on Sequim. 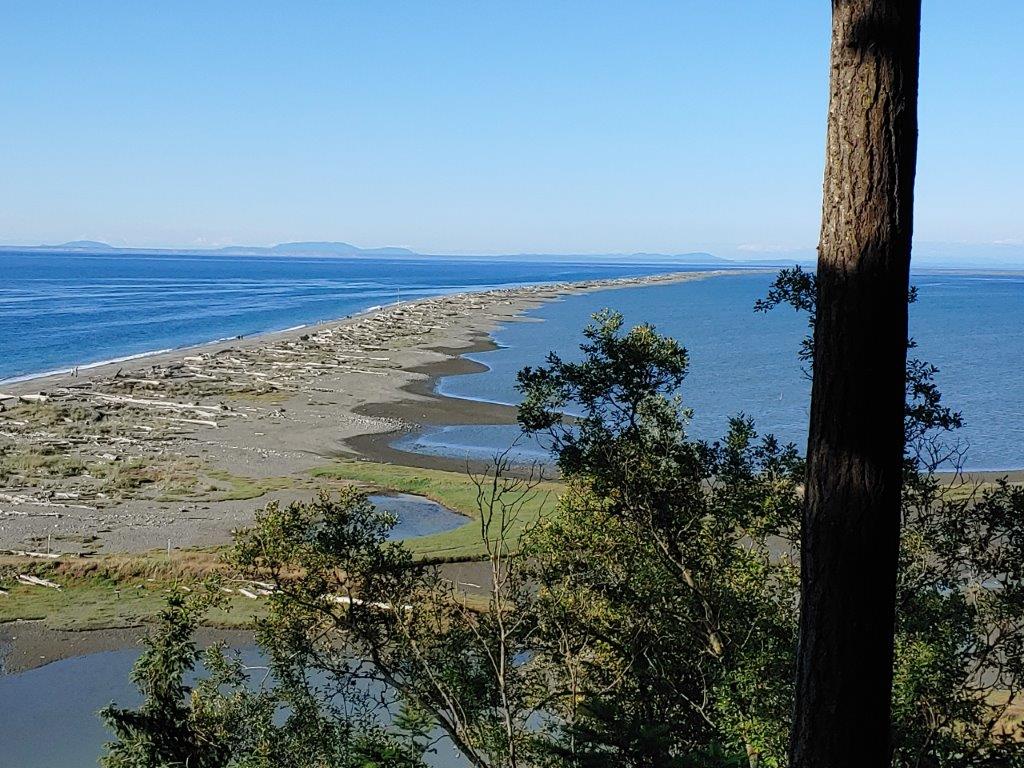 While in Sequim we walked along the Dungeness Spit. A sand and driftwood bar that created Dungeness bay. About five and a half miles out on the spit is a lighthouse, but we didn’t hike that far. We also visited a couple of lavender farms, which are about as ubiquitous as wineries back in Norther Virginia. This was also the first place since starting our trip that we spent any real time just sitting at ‘home’ relaxing and gazing at the scenery—not that we didn’t do a lot of scenery watching other places. This place was hard to leave. But after a couple of days, we had to pack up, say goodbye to our wonderful hosts and move on.

I mentioned Lavender Farms earlier, well … one of these farms happens to planted around a replica of Mount Vernon. Having been to George Washington’s real home in Virginia, we had to take a gander at the replica. While missing some features, it is quite impressive.