Taking a nice leisurely Sunday drive through the backroads of Virginia.  Virginia has a designated set of scenic 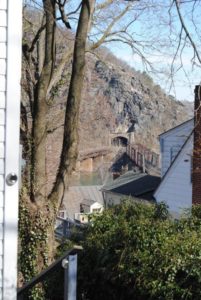 roads they label as “Virginia Byways”.  You can get a map of these roads, or just start driving out in the country and follow the signs.  Between the cities and towns, Virginia is full of scenic roads.  In Northern Virginia, these byways take you through horse country and vineyards.  On a weekend you can catch horse riders dressed up in their finest equestrian apparel, just like you’d see in an old movie when the upper crust prepared for the fox hunt.  The horses are decked out, too, in fancy tack. 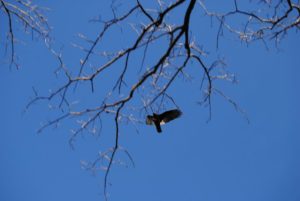 The road winds through the Virginia wine country which is quite picturesque.  It seems (just like on the Schwab retirement commercials) that every retired DC employee sold their very expensive DC houses and bought land in Loudoun County to plant grapevines.

I have a copy of Viva Tyson’ magazine, a local advertising magazine for 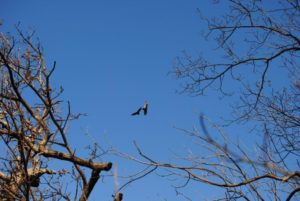 the Tysons Corner area, which has a spread on some of the Loudoun County vineyards–a short drive from Tysons Corner. 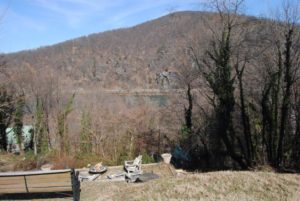 There were 40 wineries divided into 6 clusters.  But as we’re driving through these byways, I’m seeing many wineries that are not in the Tysons’ summary.  It’s running about two to three unknown for every one on the list.  So, a lot of folks must have taken the advice of those retirement magazines and opened wineries.  A few years ago, I thought about making a list of all the vineyards and visiting them during a summer.  Well, I can’t drink that much wine, and I don’t want to dedicate every waking hour of one summer to driving, drinking, and sleeping.  Maybe, I’ll hit a few each summer.

But, what does this have to do with Harpers Ferry

(which is not even in Virginia) and BEARS?

Harpers Ferry is about a one hour drive from our home in Vienna VA.  But, with the distractions of all the sights and sounds of the Virginia Byways, you have to be pretty determined to make it in an hour (and no stopping at a vineyards for a wine tasting).  Of course, we usually stop (or at least slow down a lot) to get pictures of the rolling farmland or rising mountains (yes, Colorado, we call these mountains–quit laughing).  This time, after turning onto State Route 671 from State Route 9, we moseyed along counting wineries and I noticed the car in front of me (yes, sometimes there is traffic out here) braking.  I too started to slow. I was still coming up on him rather fast so I laid hard on the brakes (anti-lock never came into action, but the stuff sitting on my back seat, including my camera, slid to the floor).  About the time the other car came to a complete stop, something came lumbering out of the woods on the left.  Of course I thought immediately it must be a deer–they do that all the time.  But, this was a bit short for a deer, and very bulky, and black! 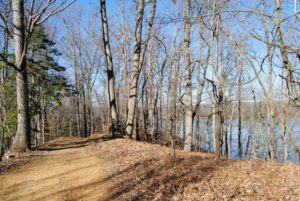 A momma black bear crossed the road, followed by a smaller bear.  They climbed up the hillside to the right and ran off toward yet another vineyard.  Do bears like wine?  The two cars stayed stopped for a while and we all tried to see more of the bears (and possibly wait for another young sibling to cross the road).  Since my camera was now somewhere on the floor under my seat, I couldn’t get a picture–sorry.  This was the first bear (black or otherwise) that either of us had seen outside of a zoo.

We continued on our otherwise uneventful trip to Harpers Ferry.

Harpers Ferry, is a very interesting and history laden town that is mostly a National Park.  It’s located on a little triangle of land where the north-flowing Shenandoah River meets the east-flowing Potomac River. 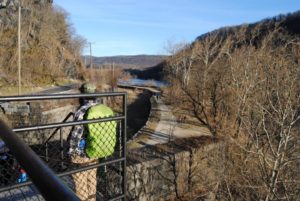 The Appalachian Trail runs right through the steps and sidewalks of town, seventy- 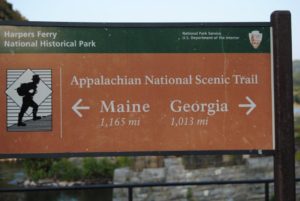 six miles shy of the halfway point. This is the area John Denver sang about in ‘Take me Home, Country Roads’ (not the town, but the surrounding countryside).  If you loved the song, you’ll feel wonderful breathing the fresh air of the surrounding hills and rivers. 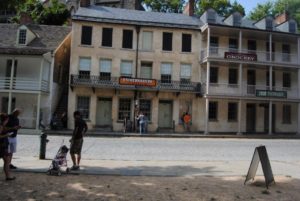 especially evident in the current political dialogs sweeping the Internet and airways) don’t realize that the problems of the Civil War didn’t start with Lincoln being elected.  Many groups and individuals from the North and the South were doing things to try to end slavery long before the shots at Fort Sumter.  Harpers Ferry played its part eighteen months earlier when John Brown and a small group of abolitionists captured several buildings of the National Armory.  His intent was to use this action and the weapons from the armory to start a slave rebellion.  The raid didn’t last long, and the rebellion never started.  Interestingly, a well-respected Lt Col in the US Army was on leave nearby and was immediately placed in charge of the operation to retake the armory.  Lt Col Robert E Lee quickly put down the raid, killed most of the participants, and captured John Brown (who was hung for treason shortly after).  It’s quite ironic that a few months later, Lee himself, would take up arms against the US Army when he turned down President Lincoln’s offer to head the Union Army and accepted a command to lead the Virginia forces.  Can you imagine how much shorter the Civil War might have been had Lee accepted Lincoln’s offer? 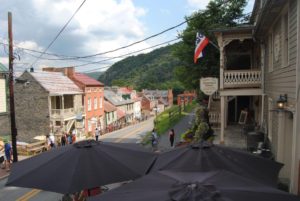 The next few years were not kind to Harpers Ferry.  Prior to the Civil War, a sliver of land known as Virginius Island (which appears to me to be an island only because of the mill race dug to power the flour mills of the day) was home to over 200 people and had several mills.  One flour mill, which was fed by an active railway, produced 3 times more ground wheat than any other mill the US, and it was not the only mill on the island.  It’s annual output was over $250 thousand per year (1850s currency). 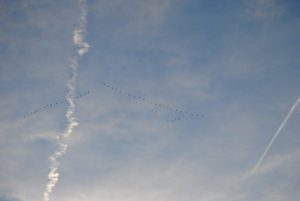 The train system into the wheat growing country and then on to the big cities of Baltimore and Philadelphia made it an ideal location.  After the war, nothing remained on Virginius Island.  Today, you can see foundations of many buildings, but nothing more.  The southern armies destroyed the mills and train tracks to prevent supplies from getting to the north.  Being among the counties that broke off from Virginia at the outbreak of the war, didn’t endear them to the south.  The northern armies rebuilt the tracks, but not the mills.  The town changed hands at least eight times during the war–each change added to the devastation. 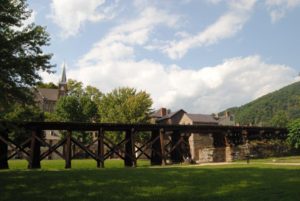 Most of the town, and its buildings, are registered US landmarks and much of that is a designated US National Park.  Many of the downtown buildings have been converted into museums dedicated to either John Brown’s raid, or the Civil War.  Black southern life is also presented among these many museums and Storer College, an historically black college which closed in 1955, still has a presence among the museum also.  Storer College was the initial site of what was known as the Niagara Movement.  The first conference, held in 1906, was a three-day event dedicated to discussing black civil rights. A century and a decade later and we’re still struggling with this.

Today, there are many shops and restaurants catering to the tourist crowd.  Susan and I particularly like a place called the Bistro 1840 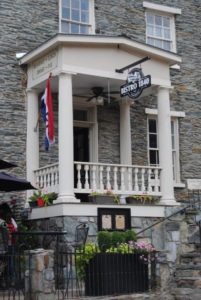 . They serve high-quality food from mostly local sources–and the wait-staff is great.  With indoor and outdoor seating you can get a varied atmosphere.  Outdoor eating gives you a choice of the front porch, where you can watch the other tourist roaming up and down High Street, or in the back, where you’re nestled between the building and the rock cliff behind.  The back is quite secluded 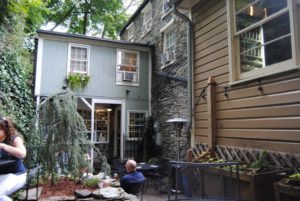 and really gives the feeling of old mountain homes.  There are a couple of new coffee shops (one has a decent selection of gluten-free treats and food), pubs, bed and breakfasts, and unique shops.  We had plans to buy several birthday gifts at the Tenfold Fair Trade Collection, but didn’t want to carry shopping bags around all day 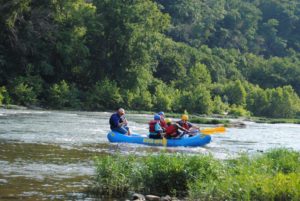 (I parked in the free spots well up the hill from the historic district–so no quick trip to the car), and we didn’t make it back into downtown after our hike until well after closing time.  Next trip!

Parking is tight during the summer (especially on weekends).  You can park a mile and a half or so outside of town at the visitor’s center and take the shuttle bus in–the shuttles run quite often. 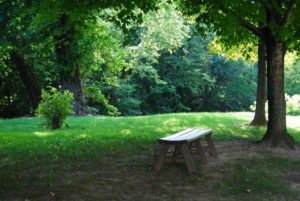 There is a very very limited amount of parking in the downtown area and it will cost you (mostly in time as you wait for a spot to open up).  As you head into the part of town where most of the residents live, there is some paid street parking, but be careful not to park in resident’s only spots.  Further into town, off the main road, you can still find available free parking, but the walk into the historic district is, as Bill Bryson would say, a bit too much for most Americans–which is why it’s available and free. That’s where we parked–because we like free, and we’re there to walk anyway. 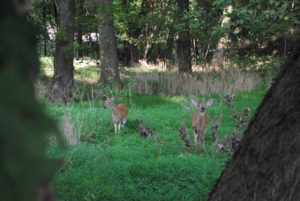 Whether you like history, country air, folk-lore, old buildings, museums, period costumes, hiking trails, train trestles, mountains, rivers, or John Denver music, Harper’s Ferry has something for you.  And, you might see a bear. 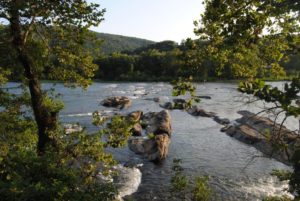