After a day at the nearby Meadowlark Gardens, we decided to take a little drive (before we start walking).  An hour away is the historic town of Frederick, Maryland 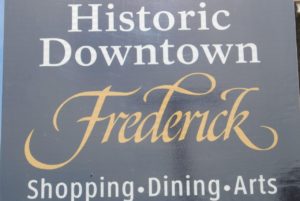 .  The drive there—if you do the hour route—is not very scenic.  We used the DC beltway heading north and veered off onto I-270.  The DC traffic flows with us almost to Frederick (during rush hour, the stop and go traffic goes well passed Frederick).  A more scenic route would be to take the Dulles Tollway until it ends in Leesburg and then follow Route 15 north.  This adds a bit of time, but is a much nicer trip.  We went up the interstate.

Our first stop was outside town at a scenic overlook.  A misnomer at best.  The ‘view’ is of the town and a Civil War battlefield—the battle of the Monocacy River.  The problem is that a tree line has grown up since the creation of the scenic overlook and it blocks the view.  If you follow some well-worn footpaths away from the parking area, you can still catch a small glimpse of the town and battlefield.

Once in Frederick, follow the signs to the Visitor’s Center at the edge of town.  Empty your bladder and fill up on information and tourist’s pamphlets.  You can also relax and watch a series of videos about the town and county.  Civil War buffs could hang out here for quite some time, but not to worry if you’re not into war stuff—many other things happened, and are happening, in this area.

One of the most wonderful things (for us) about Frederick (other than it’s named after me), is the constant work they have been doing on the waterway that runs through downtown.  Since the 1970s, Carroll Creek has been undergoing construction.  First, as a simple flood prevention project.  That turned into a beautification project somewhere along the line (early 1990s, I believe).  And for the past decade that we’ve been visiting, the creek corridor through town has been showing interesting signs of  being a people place.  A walkway runs along one side from one edge of town 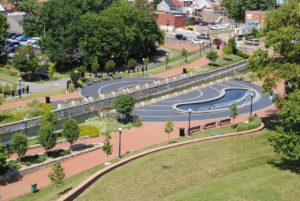 to the other—through a grand park—and, every visit exhibits more walkway on the other side.

Public art pops up on the bridges, benches, walls… everywhere.  I can’t do it justice in this short blog, so go to https://www.cityoffrederick.com/169/Carroll-Creek-Park to read about what the magnificent residents have done to this public space.  But I’m jumping ahead in my little story…

.  After you get your ticket, run back to the Visitor’s Center and have them validate your ticket.  It will knock quite a bit off the price (maybe even enough to park free, as I did).  After validating your ticket, go to the top deck of the garage and experience the best view of town.  Even if you don’t park there, visit the roof.  You won’t be sorry.

On the other side of the parking garage, is an art gallery/school.  If you have time and it’s open, stop in for some interesting local art.  Or walk past the building and you’ve reached Carroll Creek.  Turn right and you can walk the newest section.  Or ,turn left and walk toward downtown—either side of the creek is good.  There is a bridge right there or cross at any of several bridges along the way—some pedestrian only.

The first bridge you come to has some of the most intricate and interesting trompe l’oeil style of painting I’ve seen in public spaces. 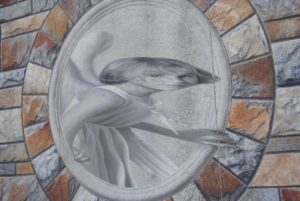 The first picture appears as a distorted view of an angel.  But if you go the second floor of the art gallery,

and enter one of the end rooms, and look out the window at the bridge, you will see a perfectly formed picture of an angel looking through an opening in the wall–the second picture is from that direction, but not from the height of the window, so there is still some distortion, but maybe you get the idea.  Displayed here are several other features of this style of art.  Almost nothing in these pictures is real.  The stone wall with gates and fences is actually a flat cement wall.  Come visit and touch the wall—it’s flat. 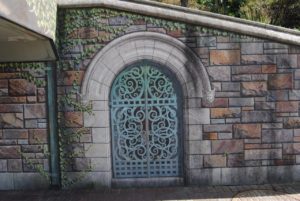 There is no stone, no gate, no ivy, no drain pipe…

We do see one real duck in this picture

(the dog and legs are real, too.  But the water fountain and stonework in the background? Nah.

At this point, we’ve seen an amazing amount of tourist s

tuff and we’ve only walked about a hundred yards from the car—and some of that was back-tracking.  The rest of the day progressed, likewise.  And, here we get to real stuff… 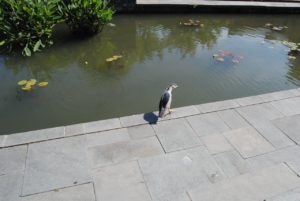 And, remember, we’re smack in the middle of downtown.  There are business and restaurants lining the streets just feet from where we’re standing. 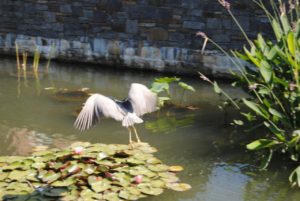 When you’ve crossed town, the creek path opens into a park

and the next thirty minutes to several hours of walking (and resting) can occur.  At the near end of the park is where the flood control aspect of the creek begins.  As the water level increases, the excess drops into a tunnel that travels underground to the Monocacy River—the creek in town stays just about the same level.

After hanging out at the park, we walked back through town and then jumped in the car to do some sightseeing from the car windows—we’re Americans, after all.  We traveled to the end of the park (it’s a long park) and got out to walk on the covered pedestrian bridge that crosses Carroll Creek.  We didn’t go any further, but we were told that a new tunnel under the highway will allow you to keep walking along the creek.  Next time!  We drove back to Virginia through some late rush hour traffic, ending the day by having a great meal at True Food (http://mosaicdistrict.com/dine/true-food-kitchen/) in the Mosaic District of Dunn Loring/Merrifield.