On day 5 we were in the general area of our destination—the wild west. But, then again… our destination was really the trip, not a place. After leaving Shamrock, Texas, we broke free of the Interstate and traveled state and county roads

through the rest of Texas and into New Mexico. This allowed us to see a different view of the

countryside. We moseyed through several small towns and past countless farms and ranches (and oil fields and wind farms, etc.).

Before we parted ways with I-40, though, we stopped at a rest area 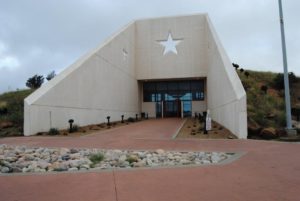 in Texas that was quite big. They say everything in Texas is big, and this rest stop was no exception. I nearly got lost between the car and the building. There were many gazebos and picnic table areas set up and lots of space in between. The view of the surrounding landscape was likewise impressive. Just before the entrance to the rest area, there was a dirt road branching off that led to a ubiquitous gate with poles on the side and a log across the top as we all see in the old west movies. The sign read Johnson Ranch, and the notice next to it indicated that everything as far as you could see was Johnson’s Ranch and you weren’t permitted on it. Rather than see what the trespassing consequences would be, we road on to the rest area—but here’s a

picture of as far as I could see.

We spotted windmills everywhere out here. From the old water 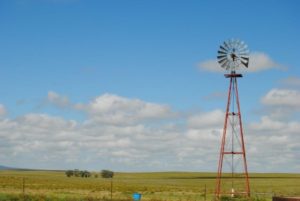 pumping windmills on just about every farm of a hundred years ago, to modern giant

windfarms. One interesting sight was the Leaning Tower of Britten

in Groom, Texas. Google says it’s a tourist attraction, so here you have it. We didn’t stop for it.

Then we arrived in New Mexico. Here our driving time took a big hit. We had to stop every few miles to get a better look at the surrounding landscape. We have the pictures to prove it. Soon after crossing the state

line, we entered the eastern edge of the 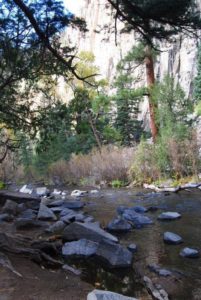 Circle of Enchantment. We only traveled a third of the circle, but the thirty miles or so took several hours (not the road’s fault, but the car

seemed to stop every few miles and kick us out). We began to see the magnificent mountain views, cliffs, streams, and wildlife that would be so common for the two weeks.

When we got tired of being amazed

, we turned south and ended up in

Taos—but the amazement never ceased. For such a small town, Taos has a worldwide following. The art, history, landscape, weather, etc. are worth coming back for many times (of course we plan to come back, but we plan to revisit many of the places we’ve seen around the world—trouble is, there are places we haven’t seen yet and they tend to get pushed to the top of our wish list).

We stayed in the historic

We ate dinner at Bella’s Mexican Grill, just a short walk from the hotel. The food was great, but the ambiance was even better. We dined in the open-air courtyard and watched the waitress make guacamole, by hand, right at the table.

hotel for a restful night.