Day 4 was a traveling day. We woke up in Little Rock, Arkansas and drove for about 500 miles. This had us seeing much more of the Arkansas countryside (from I-40). We drove through the hot spots of Conway and Russellville, eventually exiting the state at Fort Smith. Arkansas has some nice rolling hills, farmland and few mountains—all pleasant, but nothing truly different from what we have east of the Mississippi.

As we crossed the state line into Oklahoma

, the weather turned a little sour on us. Nothing terrible, but the sky clouded

up and we had a few light rain showers. Since we crossed the state lengthwise, we were in Oklahoma for quite some time. We spent more than our normal rest-stop time looking around the museum like setup at the welcome center.

In order to break up the monotony 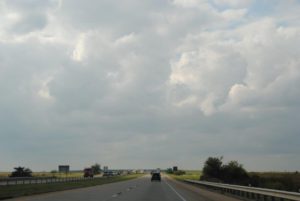 of the drive, we toyed with the idea of getting off the Interstate and following along some ending routes of the Trail of Tears (forced relocation of Southeastern Native Americas to the Oklahoma territories), but we needed to make it to Texas by nightfall. The rest stops and information signs along the road portray a significant amount of Native American history that Oklahoma wants to be remembered—something worth coming back for.

The biggest benefit for me of this day of driving was to see the environmental change from central Arkansas to the pan-handle of Texas. We went from the same scenery we see back home to cotton fields, flat desert-like expanses, dusty fields, oil rigs, and everything we tend to think of as the ‘West’. (minus the great gorges we will experience later).

Eventually we did make it to the other side of Oklahoma and crossed into Texas. A few miles beyond the border is the small town of Shamrock

, Texas. Looking from the Interstate you might not think it’s such a small place. The town boasts 500 hotel rooms, so there are quite a few big-name motels near the interchange. But beyond that, there is not much, and what there is seems to be run down or closed down. There were a couple of restaurants along the main street that paralleled the Interstate. Some of these we left-overs from the Route 66

Yes, a few miles back (in Oklahoma) we met up with the historic Route 66. Much of the remainder of our drive west, was filled with reminders of the iconic route from Chicago to Los Angeles.

Shamrock offered a pleasant rest but the gluten-free options were quite limited. We were too tired to worry about food, so after a brief stop in the local grocery store, we chowed down on vegetables, nuts, and potato chips. It was all we needed to recoup our strength for sleeping.

I’m sure some of the locals love Shamrock, and there were no train whistles that night. We were refreshed for another day of travel—that’s all we needed.