On Day Three, we awoke early to get on the road for a short five-hour trip to Arkansas. The drive from Nashville was completely uneventful—no Hell’s Angels or other distractions. We did begin seeing our first cotton fields 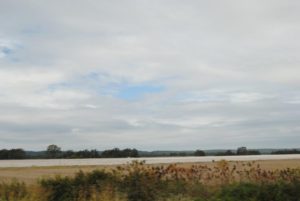 , something we saw quite a bit of over the next two days. As we neared the Mississippi River, we toyed with the idea of dropping down into Memphis for a quick visit, but our real goal was to make it to Little Rock in time to see the Clinton Presidential Library 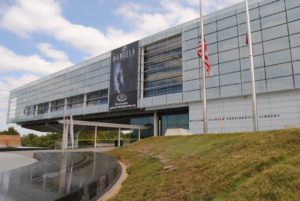 We did get to the Library in time. If you ever want to get a boost of American spirit and evidence that the American dream is alive and well, peruse the Clinton Presidential Library. Following Bill’s life, and how he handled it, from birth onward is inspiring. I walked out wanting to jump head-first into politics to change the world. We joined a tour as a guide lead us around the museum explaining the various aspects of the Clinton Administration. The only disappointment was that we could not take pictures inside the replica of the Oval Office. I did take a photo of the desk Clinton had in the real Oval Office

from outside the door—that much was allowed.

One very interesting thing about the library is what was outside

. On the lawn, in front of the building is a small tree with an unusual history. Anne Frank looked at and wrote about a Chestnut tree she could see from her secret home. That tree gave her pleasure and hope. In 2010 the tree succumbed to disease and storm, but several saplings were saved and planted around the world. Here is one of those.

After leaving the library, we drove to the next parking lot to see the Heifer Project

—something we have supported financially for many years. We’ve even given Heifer Project donations as gifts to individuals who would rather not receive another wall hanging or paperweight. So, we had to stop in.

They had their own museum which follows their deeds from inception to present day, along with history of those who have furthered the projects goals. Quite impressive. But due to the impending closing time, our visit continued outside ‘on the farm’.

Outside the headquarters building is a small demonstration farm,

where the Heifer Project is raising animals

and experimenting with crops in sustainable, manageable gardens. They do much more than I knew. We had a good conversation with several workers as they talked, with great affection, about the animals and what Heifer Project was doing with them.

One last stop was to the park next to the Clinton Presidential Library grounds. A wetlands area next to the Arkansas River has become an interesting park. We started by walking across an abandoned 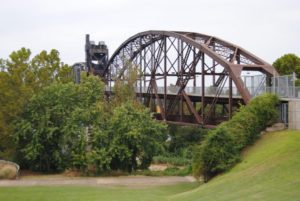 railroad bridge that has been repurposed into a pedestrian bridge. It was a drawbridge that they permanently raised and paved over allowing access to walkers, runners, and cyclists. It had quite a bit of inhabitants even though they had to travel significantly out of their way to cross it. After crossing the river and returning, we took a walk around the 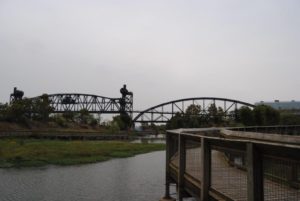 boardwalks of the park. It had a unique calming feel about it, just a short trip down the road from downtown Little Rock.

As the sun began to go down on a long day which started in Nashville, we headed to a local Whole Foods for dinner (their hot food bars are similar everywhere) and then to the hotel. Tomorrow we have our longest driving day yet.