Our journeys took us to the capital of Ohio for a short afternoon visit.  We came in from the west on Interstate 70.  Rather than heading into downtown and getting off, we exited the highway just a bit west of downtown on US Route 40.  At one-time US40 was the main east-west road in the US.  It was (and kinda still is) called the National Highway with its beginning in Atlantic City, New Jersey and western terminus in San Francisco, California.  Today it’s not so important since most of the distance has been replaced by Interstate.  Where US40 crossed a once-major north-south road, in Vandalia, Ohio, there is a sign that reads “Crossroads of America”.  That distinction has been moved a few miles south-east to the interchange of I-70 and I-75.

Anyway, we headed east on US40 for a few miles as it entered downtown Columbus.  The skyline is so different from my first sighting in the late 1950s and early 1960s.  I remember entering the much smaller city and seeing the tall buildings rising far into the sky.  The tallest building look to me like the pictures I’d seen of the Empire State Building.  It looked like New York to me, so I thought all big cities must look like this.  Years later I actually saw New Your City and the comparison vanished in my mind.  Today, you have to look carefully to even see that once-tallest building that defined the Columbus skyline.

We drove in on Broad Street, past the traditional city landmarks, Palace Theater (every city must have had a Palace Theater at one time), museums, churches, government buildings.  We crossed the river and turned right on Washington Street only to find it was closed due to construction.  We could see our destination, so we meandered through a few parking lots to avoid the street barriers and parked at the entrance to the Topiary Park (http://www.topiarypark.org/).

Topiary Park is billed as “a landscape of a painting of a landscape”.  The seven-acre park is a topiary interpretation of A Sunday Afternoon on the Isle of La Grande Jatte by Georges Seurat (better known to modern folk as Sunday in the Park with George, 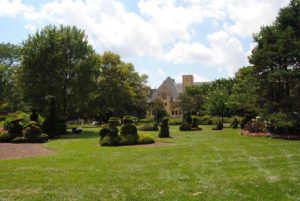 due to a musical by that name that was inspired by the painting).  Originally created and sculpted by James T. Mason, it is maintained now by landscape artists (or whatever the correct title is) as seen in one of these pictures. 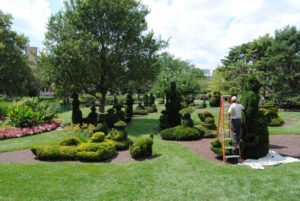 If you stand on the designated square stone on the eastern side, you can see the scene as it appears in the painting.  Of course, you can also meander through the garden and see the individual plants in detail.

From there we traveled about two miles to the 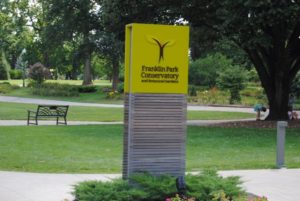 Franklin Park Conservatory and Botanical Gardens (http://fpconservatory.org/) on West Broad Street.  This consists of a large set of connected buildings and hot houses sitting on a huge plot of land with multiple gardens, ponds, paths, and so much more.  Entering the building costs a few bucks, but the grounds are free.

We went inside to see the galleries and greenhouses (and the restrooms).  They also have a large number of topiaries 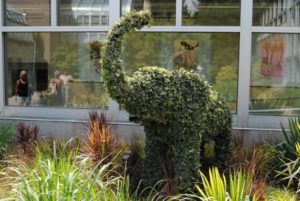 scattered around (I guess this is a Columbus thing?).  The place we spent the most time was the

butterfly room.  There is a set of airlocks you enter and exit through so you’re not letting out the butterflies.  As you exit they have mirrors so you can spot hitchhikers trying to escape.

Outside we toured the Community Gardens along with a section called the employee test garden.  This is where the park horticulturalists test out plant and planting ideas.  It didn’t look very amazing to me, but what do I know about plants and what needs testing?  We ended up in the back of the huge building where there is large patio and set of doors as if that could have been the main entrance at one time.  It was now locked and appeared to be for employee use. 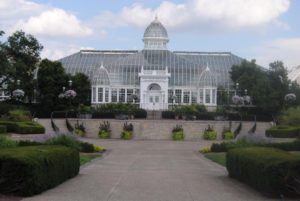 Susan pressed the button labeled “Ring for Help”.  The door buzzed and we opened it.

I don’t know who pressed the buzzer or what they expected to happen next, but we just started wandering through the plant room from the back.  We ended up back at the front and left.

We weren’t finished yet….  There was a farmer’s market in the parking lot so we bought some tomatoes and a squash (this looked so good, Susan wanted to display it rather than eat it–we were informed it would last about two weeks before rotting).  Then, we were finished.

Just south of the intersection of two Interstates (I-70 and I-71) that cut through the heart of town, is the old section settled by German settlers—so, of course, it’s called German Village.

In addition to the historic old buildings and multitude of small interesting shops on Third Street, you will find an amazing book store (http://www.bookloft.com/)

, The Book Loft.  It advertises itself as having 32 rooms of books.

Now 32 is a bit of a stretch since some of the rooms are more like nooks or crannies, but you get the idea.  You can meander through this old place and find almost any reading material you can imagine.  We couldn’t leave without buying three books, a music CD (yes, we still have a CD player), and some socks.  The prices are great.

Speaking of books, at the house next door to the back entrance, there is a Little Free Library (https://littlefreelibrary.org/).  I picked up another book.

From here we went to eat at S 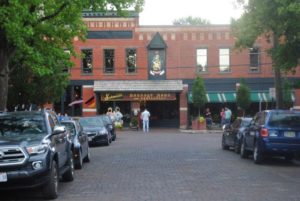 chmidt’s Restaurant Und Sausage Haus.  Great German food!  While we ate a two-man band played (tradition Bavarian accordion and drum music).  Many old classics, but a few more modern songs with a German sound.  After dinner, we walked the streets of the village and came upon a large park.  There were pavilions, a stage and bandstand, many tables and benches under shady trees, and as most parks have, a big statue standing very tall in the center.

The strange thing about this statue is that it’s not a statue of a general, or a soldier, a politician, or even the rich guy in town.  This monument was honoring a poet—a German poet.  Rather than dedicate a public area of relaxation and contemplation to our most horrific mistakes and atrocities, the residents of Columbus, in 1891, named this park after a poet—Friedrich von Schiller.  (It was renamed as Washington Park temporarily during the first world war—be we got over our dislike of Germans and brought back the name.)  The park has other memorials in it that celebrate people being nice to each other.  What a concept. (https://www.columbus.gov/recreationandparks/parks/Schiller-Park/)

The day ended with a rain hampered drive into the what would be the western setting sun, if it was an hour or so earlier.